PACT Events over the Christmas Period 2020

Two important events that always take place over the Christmas period are carol singing and the Christmas lunch for elderly residents. Because of the changed circumstances this year, both of these did happen, in a slightly different way to normal. A double page promoting PACT and the message of Christmas was provided for two weeks in the Petersfield Post.

Carol Singing
As the usual Carol Service in the Square was not able to take place, 17 groups of people from a wide variety of churches and friends sang carols around the town instead.

In Buriton, two groups sang around the streets and a nativity trail, with contributions from many different people, was also set up.

Residents in many places came outside to join in with singing and sometimes playing instruments. In one road, residents even offered mulled wine and mince pies! It is likely that more people were reached than for a long time, the Christmas message was shared, and it was good to meet them where they were. 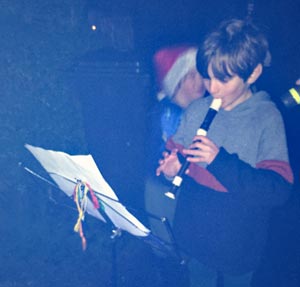 Steep
In Steep Anne Grove dropped off flyers along Church Road and they had two socially distanced/permitted number groups at the church end of Church Road, and we understand there was also a group at the other end of the road. All good fun, met some new neighbours, and our singing was greatly enhanced by one of the youngsters (Joel Green – see right) giving us impromptu accompaniment on his recorder.

Christmas Lunch
This year, Marika and her team cooked the lunches at the Salvation Army, and volunteers came and delivered them to 76 residents. The meals were very thoughtfully and skillfully prepared and tasted ‘excellent’. Gifts were also provided, and some Christmas cheer was shared to people who might otherwise have been all on their own.

Enormous thanks and blessings to everyone involved!

In Buriton we had two carol singing groups singing around the streets on one night. We also ran a nativity trail. It wasn’t technically a PACT event but it included contributors from different churches – St Mary’s, St Laurence’s, Hope church – and from none.